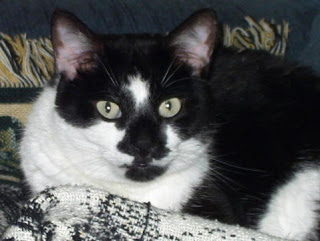 Let’s get one thing straight right up front: this is not one of those cute little stories about a loving, adorable cat. This isn’t even a story about me. It is a story about Bob and Carol – two humans that I adopted. In fact, I wanted to title this, ‘The Evolution of Bob and Carol’, but my agent said it would never sell.

My life before Bob and Carol isn’t relevant except to say that life in the wild was an adventure with plenty of stimulation and many warm, tasty meals. In fact, I was a great hunter, if I must say so myself.

Still, I was missing that thing called ‘TLC’ – you know, tender loving care (in other words, pampering) as well as a guarantee of ‘three hots and a cot’ every day. Because of this, Bob and Carol easily lured me into their house by offering me a turkey dog. The dog tasted great, and my mouth salivated for more; but I soon found out the dog was only a deception – a way to entice me into their house. How do I know? Well, for one thing, in almost three years I have never had another turkey dog.

Instead, Carol gave me dry cat food – UGH! When I protested by not eating this junk, she switched to canned food. Can you imagine all the preservatives and entrails I ate? It is enough to make you toss up a hairball.

Now, to be fair, you have to understand that Carol is a vegetarian. Do you know what a cat’s definition of a vegetarian is: a lousy hunter. Anyway, she won’t even cook meat dishes for her husband. If Bob wants meat, he has to buy and prepare it himself. What did I get myself into? Before I decide to live with someone in my next life, I am asking for references.

When I discovered Carol’s protein intolerance, I realized that ‘cat training’ these two would not be easy; but I am always up for a challenge. From the start, I had one thing going for me: they were both ‘softies’. I found that if I wanted attention, all I needed to do was snuggle into their laps. My God, you would think they had won the lottery. They took so many pictures of me snuggling and rubbing up against them that I saw spots in front of my eyes for weeks. But, being the good-natured feline that I am, I put up with it.

Well, all this love and affection began to work; and, the daily spraying of the litter box walls didn’t hurt either. Boy did that get Carol’s attention. She consulted with several doctors (they call themselves ‘Vets’, like they were in any war I ever heard of) to help diagnose the problem. She eventually found a doctor in Hawaii that knows something. He advised that what I needed to control my PH (whatever that means) were three lightly cooked meals a day of meat. Finally, someone who understands cats!

Carol, being a ‘health nut’, wanted to do this right. Get this: she buys organic chicken livers and hearts (like I could tell the difference), top-sirloin steak, chicken breasts, and tuna (the real fish, not the canned stuff). Oh, the aroma of fresh meat in the air – you can’t beat it! Well, I thought I had died and gone to cat heaven.

Okay, before you get too excited for me, let me tell you this meal thing isn’t all rosy. She still adds things like grated carrots, rice, millet, flaxseed oil, and vitamins to these meals, but I have learned to live with it. I can usually eat around most of the stuff. The only real drawback to this whole meal arrangement is that I still have to put up with Bob’s daily whining that he never gets steak, but I just tune him out.

The other thing that really got to me in the beginning was the sleeping arrangements. These two expected me to sleep on the floor in some furry foam circle they called a bed. Listen, if I eat top-sirloin steak and fresh tuna, I do not sleep on the floor! Furthermore, if their king-size, heated waterbed is good enough for them, it is definitely good enough for me. But, when I snuck into their bed one night, Bob, you know, 'the whiner,' complained about his allergies. Unfortunately, Carol listened to him and out I went. I realized that I needed a better plan – a ‘spraying the litter box’ kind of plan. So, here’s what I did:

That night, I waited until they were both asleep. I crept into the room (cats can be very stealthy when they want) and softly jumped up on the bed. I crawled up to where Carol was sleeping and snuggled into her left arm and then gently placed my head on her chest. Unfortunately, she woke up, so I had to do some fast thinking. Thank God that my instincts kicked in about then. Purring, while rubbing up against her face with my forehead, did the trick. She smiled, kissed me on the head, rolled onto her side, and let me snuggle in close to her warm body. I had the best night’s sleep in my life. Well, by the end of the week that nasty old foam thing was in the basement (good riddance). And, every time Bob began to whine about his allergies, Carol would tell him to take a pill. Score: Cats 2 – Humans 0.

Okay, by now you think I have it made with great meals and comfortable sleeping arrangements. You couldn’t be more wrong. Allow me to explain the current situation: Bob and Carol have this nasty habit of leaving the house several times a week – often for hours at a time. You might ask, “What’s the big deal about that?” Well, I get bored easily when there is no one around to play and snuggle with. Besides, when I am not stimulated, I become irritable. Also, I don’t like the strange noises in the house when it’s empty. It frightens me. Okay, I understand that it might be difficult for you to picture me irritable or frightened, but it does happen. My solution to this problem: Bob and Carol should never leave the house.

I will let you in on my plan (so far, it seems to be working). I call it the ‘rope-a-dope’ trick. I have this rope in my toy basket that I never play with because it is boring. However, more by accident than anything else, I found out it is the perfect tool to generate guilt. Here is how it happened: One day while Bob and Carol were gone, my teeth began to bother me. I started searching through the basket for something to gnaw on when I came across the rope. I chomped down on it and what do you know, it seemed to help. Well, guess who walks into the house while I’m gnawing on the rope? You guessed it, and boy did they look shocked. Sensing their concern, I began to meow and knead the floor while I chomped on the rope. Let me tell you, I should have won an Oscar for this performance. Both of them stroked and massaged me while telling me how sorry they were for leaving. They pulled out the treats in an attempt to bribe me – asking for my forgiveness. The whole time I played it cool, turning my back on them and sticking my tail into their faces. They then said the magic words, “We promise not to leave you for the rest of the week.” VICTORY!

Well, the next time they left, I decided to test the plan again. As soon as I heard the garage door opening, I ran from their warm, cuddly bed to the living room, picked up the rope, and went through the same routine as before. Sure enough (humans are so predictable), they saw the rope and I received the royal treatment again for the rest of the day. Now, every time they leave, out comes the rope. I don’t even need to do anything any more. Bob and Carol are now calling the rope ‘my security blanket’. I suppose they are right. I am now secure in the fact that they will pamper and spoil me every time they come home.

Granted this extra attention doesn’t solve the problem of being bored and frightened while Bob and Carol are away, but the pampering helps to soothe one’s soul. Besides, I deserve it!

Okay, I realize that these things might not seem too important to you readers out there, but to us cats, it is a matter of respect. In ancient Egypt, we were worshipped as gods. I am not asking for anything more than that.
Posted by Bruce at 12:43 PM

Please feel free to comment on any story. By taking a moment to share your thoughts you add to these and future stories as well as inspiring me.

Welcome To My World

"NOTHING COMES INTO EXISTENCE UNINVITED"

Thank you for visiting "The Writer's Corner". Hopefully, you will find these short stories interesting as well as entertaining.

"The joy is in the creating of characters, settings, plots and storylines. The fun comes from experiencing life through the eyes of the characters."

Please feel free to comment on any story. By taking a moment to share your thoughts you add to these and future stories as well as inspiring me. You can post a comment below any article or send me an email: Bruce.TheWritersCorner@gmail.com